D-STAR* (Digital Smart Technology for Amateur Radio) is an exciting new form of Amateur Radio that compliments other parts of the hobby including VHF, UHF operation, Contesting and Satellite communications etc. Utilising digital communication and the Internet, D-STAR allows you to communicate worldwide with other operators who are connected to D-STAR* repeaters. 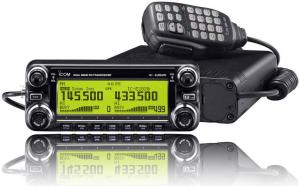 D-STAR* (Digital Smart Technology for Amateur Radio), a standard published in 2001, is the result of years of research funded by the Japanese government and administered by the JARL to investigate digital technologies for amateur radio. D-STAR* is an open protocol – published by JARL, it is available to be implemented by anyone. Whilst Icom is the only company to date that manufactures D-STAR* compatible radios, any equipment or software that supports the D-STAR* protocol will work with a D-STAR* system.
In a D-STAR* system, the air link portion of the protocol applies to signals travelling directly between radios or between radios via a repeater. D-STAR* radios can talk directly to each other without any intermediate equipment or through a repeater using D-STAR* voice or data transceivers.
The gateway portion of the protocol applies to the digital interface between D-STAR* repeaters. D-STAR* also specifies how a voice signal is converted to and from the stream of digital data. The D-STAR* codec is known as AMBE® (Advanced Multiband Excitation) and the voice signal is transmitted in the D-STAR* system at 3600 bits/second (3.6 kbps). 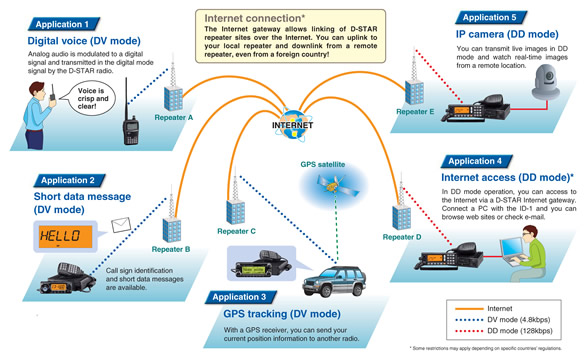 The D-STAR* system supports two types of digital data streams. The Digital Voice (DV) stream used for example on 430-440 MHz contains both digitised voice (3600 bps including error correction) and digital data (1200 bps). Using a DV radio is like having both a packet link and FM voice operating simultaneously. The Digital Data (DD) stream, used only on 1.2 GHz, is entirely data with a bit rate of 128k bps. The data connection to a radio that uses DV is via an RS-232 interface or USB 1.0. An Ethernet connection is used for high-speed DD D-STAR data. Ordinary terminal emulation software (DV) or a Web browser (DD) will be sufficient for exchanging data.